On 21st June, the Dawoodi Bohra community of Birmingham celebrated the fourth anniversary of the inauguration of their masjid – or mosque – by holding a tree plantation ceremony.

The event was presided over by Prince Ammar Jamaluddin, brother of the leader of the Dawoodi Bohras, His Holiness Syedna Mufaddal Saifuddin, who planted an olive tree, known to symbolise friendship and reconciliation, and an apple tree, which symbolises good health and future happiness. 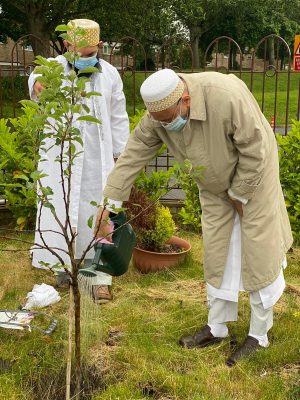 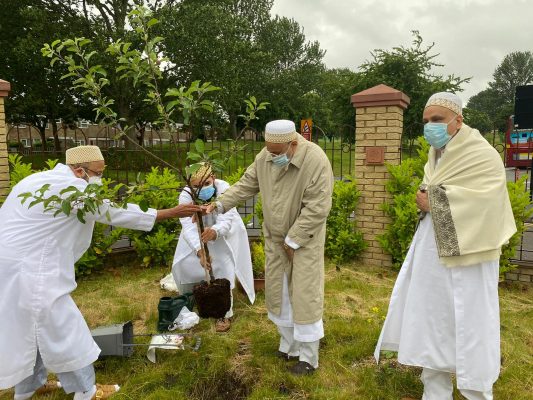 The trees were planted in the grounds of the masjid and local Dawoodi Bohras were encouraged to participate in the celebration by planting a tree in their own gardens.

Deforestation remains a serious issue in many parts of the world. The Dawoodi Bohra community of Bimingham is keen to contribute to the city’s tree cover as part of the faith’s global Project Rise initiative.  Local Bohras are therefore joining thousands of people across the UK by participating in the Queen’s Green Canopy initiative that encourages the public to “Plant a Tree for the Jubilee” in celebration of the Queen’s Platinum Jubilee in 2022.

In 2017, His Holiness Syedna Muffadal Saifuddin initiated a worldwide project encouraging members of the Dawoodi Bohra faith to plant 200,000 saplings to help conserve the natural environment where they live, and to raise awareness of the environmental issues that the planet is facing.

Other events under the Dawoodi Bohras Project Rise global initiative include clearing streets of litter, beach and river clean-ups, recycling and upcycling activities, and awareness campaigns about sustainability and the damage caused by single-use plastic.